The history of the Pilates method

Joseph Pilates was born in 1883 in Germany, his unstable health led him to look for a way to strengthen his body. He therefore developed a program of exercises that allowed him to surpass all his problems and develop his body muscles. In 1912 he took up exile in England where he worked as a professional boxer and as an acrobat in circuses. During World War I, he was incarcerated on Man Island where he became a nurse. It is in this atmosphere that was developed what would later be known as the Pilates method. 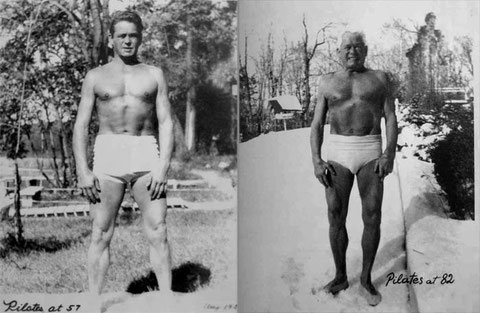 He rehabilitated prisoners and, using bed springs, developed the resistance concept: the first “reformer” machine was then created. Later, he went to the USA as an expatriate where he opened his first studio that soon had a lot of success notably with dancers such as Balanchine or acrobats and athletes.

“Romana’s Pilates” method’s name comes from Romana Kryzanowska who was a Joseph Pilates’s student and then became an instructor. During few years after Joseph’s death in 1968, his wife (Clara) continued his work. Then Clara handed the method’s legacy to Roman who in turn became director of the famous studio.